My religion is mole negro, and Soledad is my guru

If you have questions about Sra Soledad, please contact me here through my current blog One Fork, One Spoon.

I’ve been telling everyone that if you want to be Zen, there’s no need to go to an ashram in India, you can just come to Mexico. You can’t plan anything, but everything works out in the end. And to make the metaphor complete, I have found my guru.

Even though I told everyone before I left that I was going to Oaxaca to learn to make mole negro, I didn’t really believe I would. I knew that it was an intensive, all-day process, and it seemed like the kind of thing you could only really learn in a Oaxacan home, from a Oaxacan grandmother. How was I, an American tourist who speaks broken Spanish, going to find that woman? It was too much like something Paula Wolfert would do for me to imagine that I could do the same.

But Mexico continues to surprise me at every turn, not only in what is possible, but also what is possible in me. I met Senora Soledad Ramirez Martinez easily enough, at the cooking class at ICO, and immediately fell in love with her. But with my pessimism, I didn’t even plot to learn with her. I just innocently asked in class, as the workshop drew to a close, “Where could I learn to make mole negro?”, and the answer came so readily, “You can come to my home and I’ll teach you.”

Sra Soledad is like that in every way. She’s no-nonsense, very straightforward, and very firm in her opinions: the best chocolate in Oaxaca (Chocolate Mayordomo), whether the vendors advertising “metate-ground” chocolate are lying (they are), whether Mexican families make their own salsa (claro!). Coupled with an incredible generosity of heart, she overwhelms you, and she’s not even five feet tall. My paternal grandmother died before I was born, my maternal grandmother when I was 15, but I didn’t know how much I was missing a grandmother in my life until I met her.

Soledad lives near the archeological site of Monte Alban, in a steep little town with an awe-inspiring view of the city. Her home sits on three terraces, the garage and the rainwater reservoir on the first, the outdoor wood-burning kitchen on the second, and the main living area with its indoor kitchen and patio on the third. She and her husband, Carlos, have four children, and I think two of them live with her, along with their youngest grandchild, five-year-old Carlita. 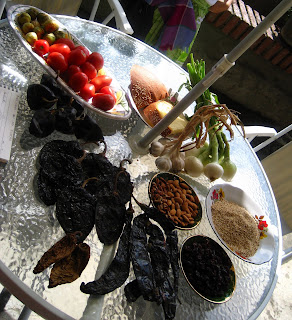 As Soledad spread out the twenty or so ingredients that make up mole negro, Erin and I sipped hot chocolate and gazed in wonder. The key chile, the hard-to-find chilhuatle or chilhuacle with its inflated, smooth look, is expensive, 400 pesos or $40 per kilo. Then there are the mulatos, which are dark, wrinkled and round; the pasillas mexicanas which are dark, wrinkled and long, and the chipotles mecos, which are tan, wrinkled, and somewhat triangular.

The sweetness comes very slightly from sugar, and mainly from the plaintain, the raisins, and the tomatoes, as well as the Oaxacan chocolate. A subtle, nutty flavor is added by sesame seeds, pecans, and almonds, as well as the eggy and fragrant pan de yema. As if all these flavors were not enough, mole negro requires just a few cloves and fresh peppercorns, a small stick of Mexican canela or cinnamon, and just a spoonful or two of Mexican oregano and thyme, as well as the tartness of tomatillos and the heady dimension of white onion and garlic. Everything gets mellowed and smoothed by chicken broth—sorry, vegetarians. Her recipe is enough to feed 30, as the laborious process of mole negro is honored by and reserved for fiestas, weddings, and other important occasions. Obviously a blend of Spanish-Moorish ingredients and New World flavors, the word mole, appropriately, comes both from the Nahuatl word “molli” for sauce, and the Spanish verb “mollinar,” to grind or blend. 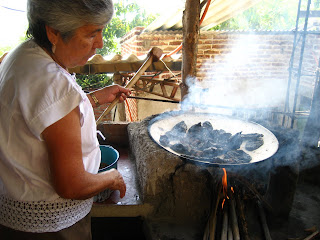 We began by deseeding and deveining the chiles, and then toasting them on her comal in her outdoor, wood-fired kitchen until they were dark but not burned, and stiff. While they soaked in water, the next very important and very strange step was to burn the reserved chile seeds on the comal until absolutely black. This is the part I can’t imagine doing in my Brooklyn kitchen, as I can’t roast a chicken without setting off the smoke detector. Hopefully, my neighbors won’t report me when I set up an illegal Weber grill on my makeshift deck. The seeds were then rinsed in water. The pecans and sesame seeds were toasted last. 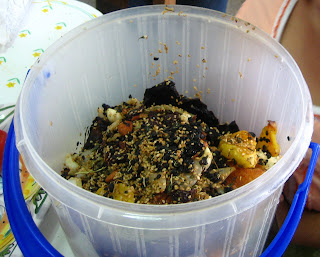 In the meantime, the tomatoes and tomatillos were simmering in water on the indoor gas stove for about 20 minutes. We fried the plaintain and the slices of pan de yema, and then the onions, raisins and pecans. We added cinnamon, in a big loose stick, and thyme and oregano. The chicken got simmered separately, creating a light broth for later use. 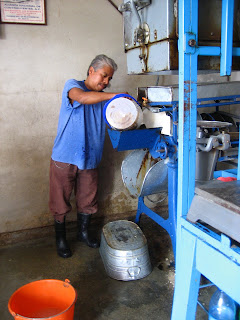 It was time to go to the neighborhood mollino or miller. It was like Mexican Sesame Street—let’s go visit Mr. Miller! All four of us walked down the hill, Erin, Soledad, Carlita, and me carrying the big bucket, and watched as the miller washed out the corn he had ground in the morning so he could push our mole through. 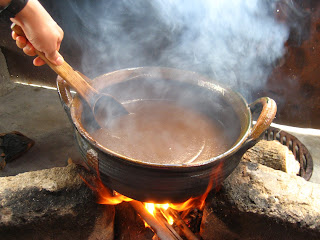 The hard part was over. All we had to do now was put it in an earthenware cazuela and cook it on a wood fire with a little oil for an hour, stirring constantly. It was amazing to watch it change in color from a chocolate brown to a dark, shiny black. (According to Susana Trilling, if your mole negro isn’t quite black, people will talk.) As we stirred and the fire smoked, the rain started to come down, and the steep slope of their street became a brown river. We tasted at 30 minutes, then 50, then 60. We added Mexican chocolate, the key thing being to use chocolate without milk, just a few spoonfuls of sugar, and then the chicken stock. Soledad asked us what we thought, should we add more sugar? And I was amazed to taste a mole so balanced, more sugar would have made it gawdy and cheap. I felt like a witch stirring a magical brew, because it was. 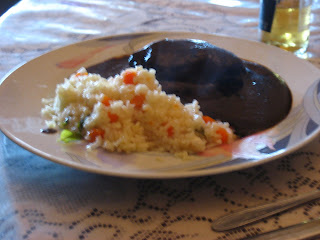 I’ve written mainly about the ingredients and the steps because at this point, I don’t know how to express in words what else happened that day. If you could see me, I would wave my hands and clutch my heart as I told you how Soledad and her family welcomed us into their home. We paid 350 pesos each, or about $35 for the all-day class, but there’s no price that can match what we found. Carlita, like the confident, well-loved child she is, chattered to us, pretended she was a bull, and served us rice soup in little plastic bowls from her toy kitchen. Carlos, her grandfather, showed us their photo albums with photos of their second wedding when they renewed their vows and their daughter Patty’s quinceanera or Sweet 15 party. Soledad told us how her father had found a big heavy slab of stone and carried it home to be her mother’s metate. They told us more stories while we ate full-flavored chicken in the best mole negro I’ve ever had with perfect rice. It’s not just that they were hospitable, but that their hospitality was almost without thought, it came so naturally. The heavy rains came early that day, and Carlos wasn’t able to find fresh blandas, a type of tortilla, to sop up our sauce, but although Soledad apologized more than once for having only tostadas, there was none of the nervous anxiety that comes with having guests. They made Erin and me feel like family friends, like we had become part of their lives and their memories. We could have sat at their table forever.

If you are ever in Oaxaca, or have friends who want to learn to cook in Oaxaca, please contact me, as I have her phone number and she would be happy to teach anyone who is a friend of “Ae-rin” or “Graciela.” I left Christianity because I hated proselytizing, but with Soledad as my guru, her religion is one I would gladly spread.
Posted by AppleSister at 9:28 AM

I've just discovered your blog which is so heartwarming and fun to read. I'm currently in Oaxaca for a holiday and am about to start a few days lessons with Susana Trilling.
I read your posting about learning to make mole negro with Soledad and was wondering if you could give me her details? I can understand a reasonable amount of Spanish although I can't express myself very well, but I'd still love to have a lesson with her. The language of food tends to be universal!
I'd really appreciate any help and information that you could provide.
Many thanks and keep writing!
Jennifer

Hi Jennifer, thanks for your kind comments! If you can email me at applesister330 AT gmail DOT com, I will get Sra's contact information to you.

I discovered your post what researching how to make mole negro. I am sooooo intrigued.

I am planning a big dinner party and want a complex dish for my new posting.

But my main concern is that I have never had mole negro. I am doing research. Can you tell me what it tasted like (in comparison to, let's say, mole poblano or any other mole). I would appreciate it!

I am heading to Oaxaca City tomorrow and I would love to take a class with Senora Soledad Ramirez Martinez. Can you email me her contact info?

Hey Helena,
I can't seem to access your profile to email you the information. If you want to email me separately at applesister330 [at] gmail [dot] com, I will email you her information. I'd just rather not post it publicly on the blog without her permission. Thanks!

AppleSister
Brooklyn, New York, United States
One woman, facing the challenge of consuming a four-pound pork roast alone, and other adventures in cooking and eating for one.